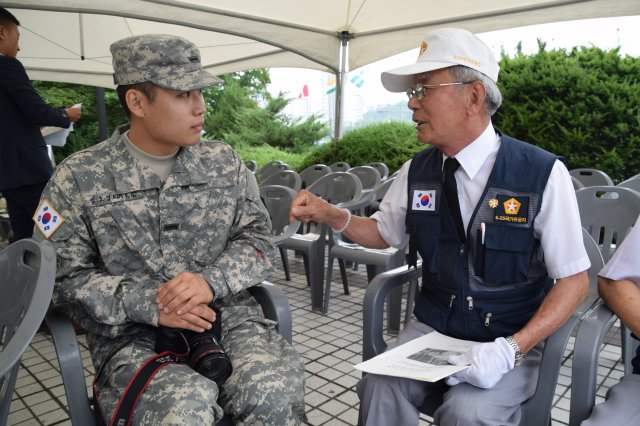 Sixty five years ago, on June 25, 1950, North Korean Forces attacked south across the 38th Parallel igniting the Korean War. The United States entered the war six days later and the U.S. and ROK militaries have been committed to preserving the freedom of the Republic of Korea ever since. The article you are about to read is part of a six-part series on Korean War veterans living in the Republic of Korea today. Through the eyes of these veterans, we got a glimpse into an important chapter in Korean history.

OSAN AIR BASE, South Korea - At 15 years old, Young Myeon Yeo made a pact with his childhood friends: to defend his country against the unexpected North Korean invasion that occurred June 1950. Little did the boy know, this conflict would rage on three more years before an armistice could be brokered.

As the Korean War erupted, the teenage boy travelled to Daegu to train for just three days before he would be assigned to the commander of the French Battalion of 2nd Infantry Division on the casualty-stricken front lines.

Yeo was no stranger to loss.

His parents passed away when he was 14 years old leaving him to apprentice for a surgeon before voluntarily joining the ranks of his countrymen.

"There were many French Soldiers killed in action while I was with them," said Yeo. "But I wasn't afraid of death," he said.

The commander of the French Battalion, Lt. Col. Ralph Monclar, was no stranger to casualties either having served in World War I and World War II where he garnered the rank of Lt. Gen.

An old war horse, Monclar took a demotion in order to lead the troops of the French Battalion in the Korean conflict.

The French Battalion was attached to the 23rd Regiment under Col. Paul Freeman and is best known for their triumph in the Battle of Chipyong-ni. This battle was the U.N. Command's first victory over enemy forces after the Chinese entered the war and is often referred to as the "Gettysburg of the
Korean War."

At the end of the war, Yeo said Monclar asked him to return to France as his adopted son.

"I wanted to go," said Yeo. "But my country was still in danger and I couldn't leave my family and friends behind."

Instead of leaving the country, Yeo enlisted in the Republic of Korea Army to complete his obligated three-year service now that he was of age.

"I was finally issued a pair of dog tags," said Yeo. "Now, I was a real Soldier."

Yeo served as a K-43 truck driver for a signal brigade in I Corps.

On a routine trip through the mountains of Sokcho, Yeo's truck hit a mine. He was medically evacuated to Jeongyang Hospital in Daejon where he would remain for an entire year before being discharged from the hospital and from military service.

Despite heavy losses on the battlefield and significant internal injuries, Yeo said he was grateful for the opportunity to serve his nation and defend the ROK democracy alongside its allies.

"Without the help of our Allies, South Korea wouldn't exist," he said. "It's imperative that we share our stories of struggle and triumph with others so they know the impact made by their ancestors."

Sixty-five years later, Yeo feels that he has made good on the promise he struck so long ago with his friends.