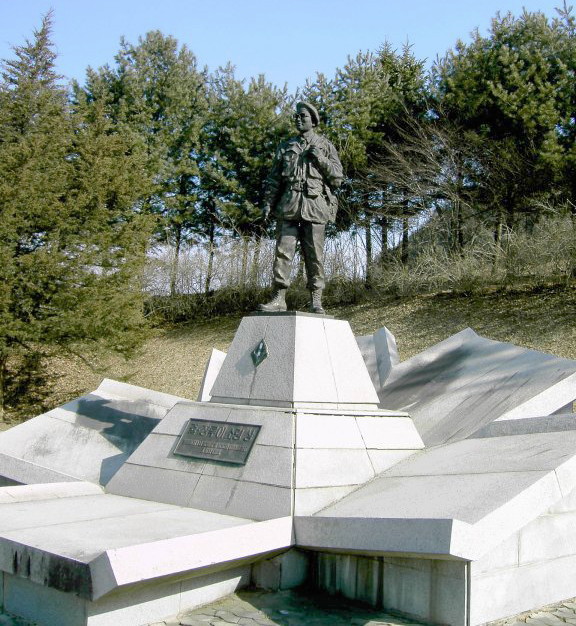 The excellent diplomatic relations between France and Korea started 130 years ago. France and Korea have decided to celebrate this event by a “Year of Korea in France” from September 2015 to August 2016 and a “Year of France in Korea” from March to December 2016. We welcome this international event with such a friendly, modern and prosperous country which is now the tenth largest economy in the world. However, South Korea is still technically at war with North Korea since the armistice was signed at Panmunjom on July 27, 1953.

The memory of the Korean War is a complete amnesia for most French people. It is very much a “Forgotten War”. This collective amnesia is guilty. The French Republic is particularly to blame. Yet the French Battalion in Korea along with 21 other nations took part in the defense of Korea from 1950 to 1953 in response to the UN request. Under the auspices of this organization, 3421 French soldiers of the army fought with bravery in Korea for the prestige of France. Undoubtedly, France owes much to its glorious soldiers for the excellent diplomatic relations it enjoys with this friendly country.

Badge of the UN French Battalion in Korea

The French Battalion had 269 officers and men killed in action (7.86 % of its strength) and 18 attached R.O.K. soldiers were killed in combat. 1350 French soldiers were wounded, some repeatedly. 12 were taken prisoners of war and 7 were missing in action.

65 years ago our soldiers in Korea were fighting under the orders of prestigious commanders such as Monclar, Borreill and de Germigny. I wonder, during this year of celebration of 130 years of diplomatic, cultural and trade relations with Korea, how many patriotic military parades will be presided by the highest authorities of our country to honor the brave warriors of the French Battalion in Korea? We dare not to make a guess. Meanwhile in the history of our country, never was so much owed by France to so few who were fighting for freedom and democracy of a friendly country.

The first phase of the War was the successful landing at Inchon, near Seoul on September 15, 1950 with the engagement of the Frigate FMS de La Grandière (F 731) of the French Navy. The daring amphibious operation code named Operation Chromite was designed by General Mac Arthur. The naval and amphibious operation allowed to cut the supply lines of the North Korean and Chinese communist forces.

Since that glorious era Koreans have continued to experience an immense gratitude to the Allied soldiers who fought valiantly under the aegis of the UN, but also with regard to their French comrades. The battles fought by the French Battalion during its attachment to the Second US Infantry Division had code names that entered into military history. All of these many battles won are worth remembering :

In the Military Cemetery of the United Nations in Busan in South Korea remain the graves of 44 French soldiers who were not repatriated. On the memorial wall there is a plaque dedicated to France. One can read the names of the 269 soldiers who died in Korea. Among these heroes the name of Jules Jean-Louis is engraved. Lead Doctor, Major Jean-Louis is one of the only westerners to have his statue in South Korea, the other one is General MacArthur who was the first commander of UN Forces in Korea. Nowadays, let us remember more than that the statue of Major Jean-Louis was built by the Korean authorities to commemorate the celebrations of the centenary of our excellent diplomatic relationships with Korea!

The Lead Doctor in Korea - Major Jean-Louis died on May 8, 1951 at the age of 34 years old. He was killed on the battlefield when saving the lives of wounded R.O.K. soldiers at Ang Nam Ri Jang on the road to Inje where the French Battalion was taking action. His bronze statue was erected at the place of his death at thirty kilometers northeast of Hongcheon[1]. On a plaque at the foot of the statue the following words can be read: ... "His heroic sacrifice for Freedom, the humanitarian ideals he embodied in the performance of its mission including serving civilians encountered during the progression of the battalion will remain in the memory of the inhabitants of this country " ...

The resistance of the French Battalion in Korea deeply impressed our French leaders and also our Korean and American allies. The French Battalion won four French citations to the Order of the Army, three US presidential citations and two presidential citations from the Republic of Korea thus sanctioning its victories, its casualties and its sacrifices. Exactly 1898 Individual Awards were granted to demonstrate the gallantry of our soldiers. Nowadays, The French Republic must not ignore it and should put them in the spotlight, as the oldest remaining French Korean War Veterans of this battalion are over their mid-nineties!

I recently attended the annual meeting of the National Association of Veterans and Friends of French UN Forces Battalion and Regiment in Korea War and the 156th Infantry Regiment (ANAAFF/UN/B&RC/156thRI) in the town of Saint-Mandė, near Paris. Only ten Veterans of the French Battalion in Korea attended this meeting. The youngest was 84 and the oldest was 88 years old. I witnessed their joyful and warm reunion. They found themselves at this very moment back to their twenties. After a few fraternal hugs, they sang together in Korean language the beautiful and emotional Korean song "Arirang". They sang this song on a regular basis on the frontline with their Korean fellow R.O.K. soldiers who served within the French Battalion to reinforce the French casualties.

It is now time to honor these brave French Veterans of the Korean War, as France knows very well how to do when honoring the World War II Allied Veterans.

For decades America had forgotten the sacrifice of its veterans of the Korean War. This war had gradually become « The Forgotten War ».

In June 2000 during the commemorations of the 50th anniversary of the Korean War, President Clinton said:

« ...  To my fellow Americans and our distinguished allies and friends from Korea, and those representing our other allies, we all know that Korea isn't about Hawkeye and Hoolihan, but about honor and heroes -- young men and women willing to pay the price to keep a people they had never met free.

To the veterans of the Korean War -- those here, those around the country, those whom we must remember today -- let me say, on behalf of a grateful nation: 50 years ago you helped make the world that we know today possible. You proved to all humanity just how good our nation can be at its best. You showed us, through your example, that Freedom is Not Free, but it can be maintained. Today, your fellow Americans say: We remember and We are very grateful. Freedom is Not Free » !

Americans appreciated their French comrades who came to fight along with them to free a small Asian country. General Matthew Ridgway, who succeeded General MacArthur, speaking to Congress in May 1952, said:

«I shall speak briefly of the Twenty-third United States Infantry Regiment, Colonel Paul L. Freeman commanding, [and] with the French Battalion….Isolated far in advance of the general battle line, completely surrounded in near-zero weather, they repelled repeated assaults by day and night by vastly superior numbers of Chinese. They were finally relieved….I want to say that these American fighting men, with their French comrades-in-arms, measured up in every way to the battle conduct of the finest troops America and France have produced throughout their national existence ».

Since June 2000, there is no longer a « Forgotten War » in Korea. The new motto is « Forgotten No More » - « Never Forget ». Now, France must be inspired to make a dignified tribute to the French Veterans in Korea during the celebration year of our excellent diplomatic relations of Korea in France and of France in Korea. Worthily celebrating the past, especially when it is a glorious one, is also the best way to prepare the best future !

[1] French Lead Doctor in Korea - Major Jules Jean-Louis was buried in his hometown in Sanary- sur-Mer. In 1986, Major General Barthélémy, former S3 of the French Battalion in Korean under the command of Monclar, reported to the Mayor of Sanary the wish of the South Korean authorities to see a twinage with the city of Hongcheon where the French Lead Doctor in Korea was the subject of genuine reverence. Thus, in memory of the courageous act of his native military doctor on 26 March 1986 the City Council of Sanary-sur-Mer gave its unanimous approval to establish a twinage with Hongcheon.