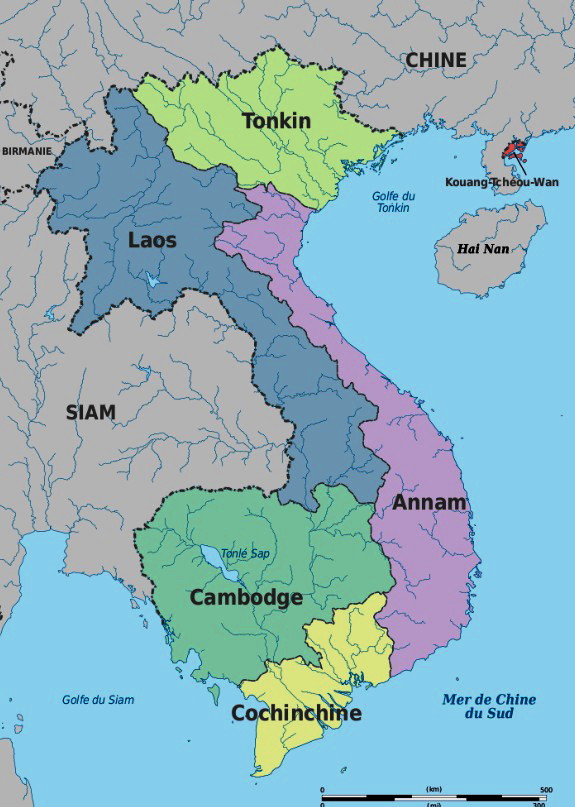 A grouping of the three Vietnamese regions : Tonkin (north), Annam (centre), and Cochinchina (south) with Cambodia was formed in 1887. Laos was added in 1893 and the leased Chinese territory of Guangzhouwan in 1898. The capital was moved from Saigon (in Cochinchina) to Hanoi (Tonkin) in 1902 and again to Da Lat (Annam) in 1939. In 1945 it was moved back to Hanoi.

After the Fall of France during World War II, the colony was administered by the Vichy government and was under Japanese occupation until March 1945, when the Japanese overthrew the colonial regime. After the Japanese surrender, the Viet Minh, a league for the Independence of Vietnam led by Hô Chi Minh, declared Vietnamese independence, but France subsequently took back control of French Indochina.

General Leclerc at the head of the 2ème Division Blindée(2nd Amoured Division) in Indochina signed in March 1946 a Political agreement between Hô Chi Minh and Jean Sainteny, Commissioner of the French Republic in Tonkin and North Annam. General Leclerc wrote at the time to the President of the Council (equivalent to Prime Minister), Paul Ramadier: "We do not kill ideas with bullets." For him, there were two good reasons for seeking a peaceful solution: "We do not have the means to re-conquer Indochina; this is a revolution, we cannot crush a revolution by force. General Leclerc was recalled back to France by the political power. It was the definitive failure of the negotiations with the Việt Minh; at the end of 1946 the first Indochina war became inevitable. The conflict was both in the context of decolonization completely unmanaged by the French political power and in the Cold War era with the strategy of indirect approach in revolutionary war (proxy war).

An all-out independence war, known as First Indochina War, broke out in late 1946 between French and Viet Minh forces.

In order to create a political alternative to the Viet Minh, the State of Vietnam, led by former Emperor Bảo Đại, was proclaimed in 1949. On 9 November 1953 the Kingdom of Cambodia became independent. Following the Geneva Accord of 1954 the French evacuated Vietnam and French Indochina came to an end.

On Jul. 20, 1954, a battlefield ceasefire was announced when the Geneva agreements were signed, and on Aug. 1, the armistice went into effect, sealing the end of the French Indochina and the partition of Vietnam along the 17th Parallel. The last French troops left South Vietnam in April 1956, upon the request of President Ngô Đình Diệm.