Monument to US Forces in the Korean War in Yangpyeong-gun

Memorial on campus of Jipyeong high school. Dedicated to the soldiers whom were in the battle of Jipyeong-ri and fought and won against an enemy five times larger.

The fierce, three-day battle at Jipyeong-ri involved the 23rd Regiment the US 2nd ID and the French Battalion attached to it, against the Chinese Army the 39th Regiment. The US and French troops formed a circular defense perimeter at Jipyeong-ri, Yangpyeong-gun, Gyeonggi-do. The fight lasted from February 13 to 16, 1951. The Chinese troops defeated the ROK 5th and 8th Divisions east of Jipyeong-ri and attacked the US and French troops using the “human wave” tactics. The US and French troops ended up fighting hand-to-hand against a force five times their number. Although completely surrounded for three days, their fierce resistance and firepower support from the rear eventually forced the Chinese to give up. Task Force Crombez came to the aid of the 23rd Regiment and French Battalion on February 16, and the Chinese retreated after suffering heavy losses. Yangpyeong-gun built this monument in 1956 to remember the spirit of those in the 23rd Regiment of the 2nd ID who gave their lives at Jipyeong-ri in the defense of freedom. 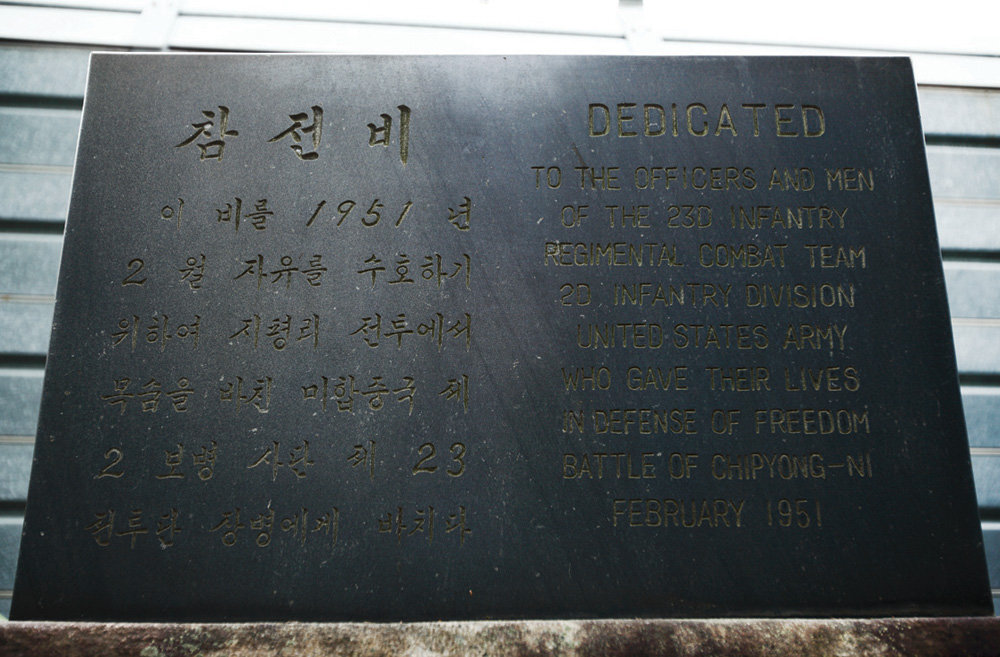 To the officers and men of the 23rd Infantry Regimental Combat Team 2nd Infantry Division United States Army who gaver their lives in defense of freedom battle of Chipyong-ni February 1951.