The Battle of AnKhe (also known as Battle of Mang Yang Pass or Battle of Dak Po) was the last official battle of the First Indochina War. It was one of the bloodiest defeats of the French Union together with the battle of DienBien Phu in 1954 and the battle of Cao Bang in 1950.

Groupement Mobile No. 100 ("Mobile Group 100" or G.M. 100) was a regimental task force unit of the French Far East Expeditionary Corps which was assembled as a convoy. It included the elite veteran UN Bataillon de Corée who fought in the Korean War at Chipyong-ni, Wonju and Heartbreak Ridge etc.. Anxious to avoid a second disaster like the siege at Dien Bien Phu, the French Chief of Staff ordered GM 100 to abandon their isolated position in the Central Highlands. This was code named opération Églantine. 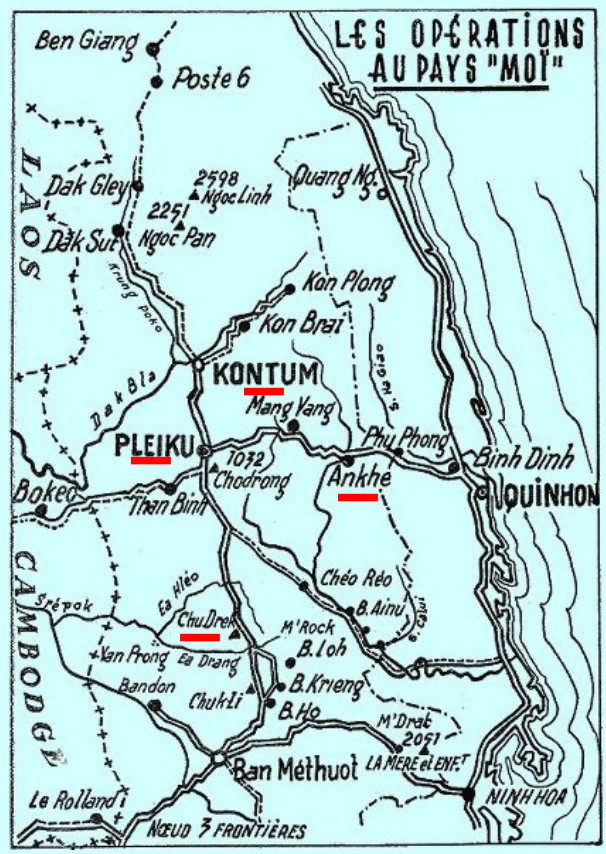 On Jun. 24, 1954, GM 100 received orders to abandon its defensive positions at An Khe and fall back to Pleiku, some 50 miles away over Route Coloniale 19. At the road marker “Kilometer 15” the column was ambushed by Viet Minh troops belonging to the 803rd Regiment and suffered heavy losses. The remains of GM 100 managed to break through the ambush. The remnants of GM 100, now with GM 42 and the 1st Airborne Group had to brave 20 miles more of enemy road and was ambushed on June 28 and 29 at Dak Ya-Ayun by the Viet Minh 108th Regiment. The survivors finally reached Pleiku the following day.

In five days of fighting, GM 100 lost 85 percent of vehicles, 100 percent of artillery, 68 percent of signal equipment and 50 percent of crew-served weapons. The Headquarters Company had only 84 men left out of an original 222. The 43rd Colonial, the 1st and the 2nd Korea Battalion which numbered about 834 men each, was now mustered at roll call with 452, 497, and 345 men respectively. The 2nd Group of the 10th Colonial Artillery, reduced to fighting as infantry after the loss of all of their guns, had shrunk from 475 men to 215 men during the fighting. Colonel Barrou and several men were taken as prisoners of war. The Viet Minh 96th Regiment suffered more than 100 KIAs in comparison.

On June 29, the remains of 1st Korea Battalion was ordered to take part in Operation Myosotis to open Route Coloniale 14 between Pleiku and Ban Me Thuot which was over 96 kilometers away. On July 17, the column was ambushed at Chu Dreh Pass by local units of the Viet Minh 96th Regiment. When the survivors finally arrived at Ban Me Thuot the following day, there were only 107 men remaining out of 452, of those 53 were wounded, in addition a further 47 vehicles were lost.

The ambush and destruction of GM 100 was considered the last significant battle of the First Indochina War. Three weeks later, on Jul. 20, 1954, a battlefield ceasefire was announced when the Geneva agreements were signed, and on Aug. 1, the armistice went into effect, sealing the end of the French Indochina and the partition of Vietnam along the 17th parallel. The last French troops left South Vietnam in April 1956, upon request from President Ngô Đình Diệm.